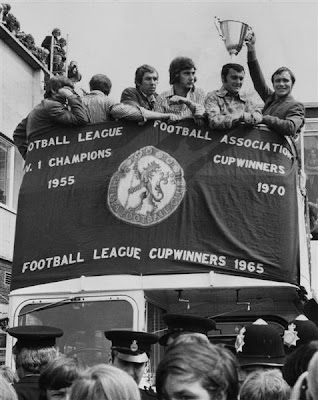 No doubt all their "supporters" enjoyed every minute of what has to be the second most important day in the club's history - only behind the day Roman Abramovich walked in with his billions by about a fraction of a light year.

The fans must be really happy - I bet it is nearly as proud a moment for them as when they were Liverpool supporters in the Eighties and the Reds won the European Cup for the third time.  Absolutely superb memories.  At least it will stop them having to apply for Manchester City's membership scheme for a few more years.

Turn in your grave, Osgood, Houseman and Hutchinson - your team has become the Leeds you despised - your team have cynically destroyed the beautiful game you once espoused, and fouled and cheated it's way across Europe at all costs. Park the bus and do whatever is needed.

And all for what - to crave the indulgences of a Russian megalomaniac who has built his empire based on bribery, corruption, and fraud.

Peter, Peter and Ian, does anyone tend your graves?
Posted by Yiddo at 3:26 PM