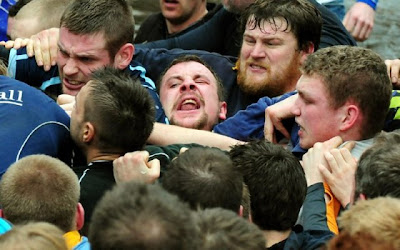 One could be forgiven for thinking the above picture was taken at Hillsborough, so pained are the looks on the faces of the people in it.

But no (thankfully) - this is a picture taken at this year's Royal Shrovetide Football Game played between the Up'Ards and Down'Ards at Ashbourne, Derbyshire, and around which several long standing rituals and traditions have evolved. The match is reputed to have first taken place in the 11th century and it is similar in rivalry and intense competition to the smokers v non smokers games which were played on the beaches in Portsalon, Co Donegal, Ireland in the late seventies of the last century.

The process of 'goaling' a ball requires a player to hit it against the mill stone three successive times. Could this be the original of the game which kept our childhoods happy and fulfilled - "three and in" or is this just a simple unexplained mathematical coincidence, with the answer only being found in a black hole? 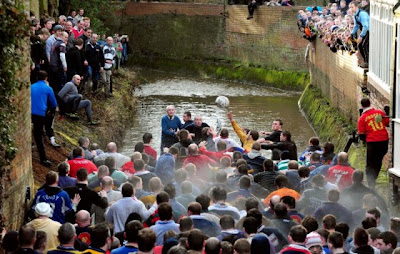 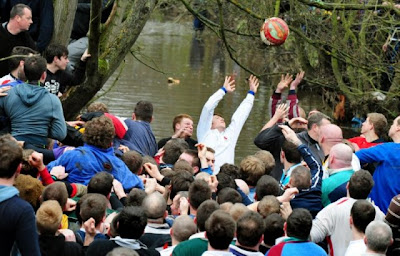 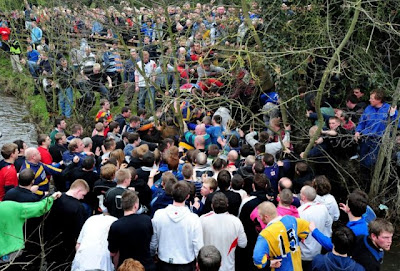 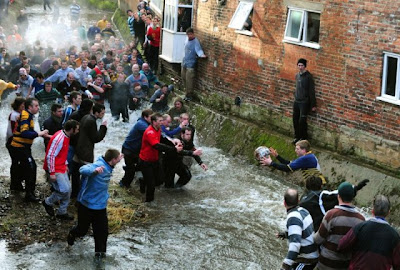 And so to the poetry, in the form of the words to the Shrovetide Tuesday Football Match anthem, sung in a local hotel before the throw-in.

There's a town still plays this glorious game
Tho' tis but a little spot.
And year by year the contest's fought
From the field that's called Shaw Croft.
Then friend meets friend in friendly strife
The leather for to gain,
'And they play the game right manfully,
In snow, sunshine or rain.

'Tis a glorious game, deny it who can
That tries the pluck of an Englishman.

For loyal the Game shall ever be
No matter when or where,
And treat that Game as ought but the free,
Is more than the boldest dare.
Though the up's and down's of its chequered life
May the ball still ever roll,
Until by fair and gallant strife
We've reached the treasur'd goal.

'Tis a glorious game, deny it who can
That tries the pluck of an Englishman
Posted by Yiddo at 1:13 PM