Its’ been twenty four years to the day since Gary Mackay scored that eventful goal in Bulgaria which saw Ireland qualify for our first major championships, Euro 88. Playing for Scotland against the Bulgarians (who needed a draw to qualify) he poked home a goal in the 87th minute and Paddy was off to Germany. Mackay apparently still gets cards from well-wishers in Ireland on this day. 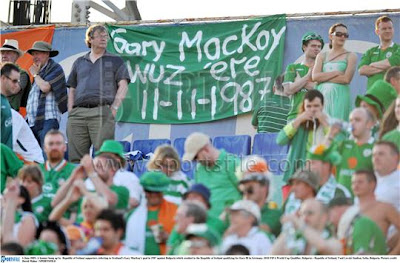 Sadly this qualification for Euro 88 was our only one for the European Championships although tonight we get the opportunity to right what many would view as a large anomaly. Qualification attempts since that year have been a combination of play-off agony, heroic disappointments (although less of these than in the good old days) and shambolic disasters. Do not come back Steve Staunton, all is not forgiven.

In the words of Smokie, it’s been twenty four just waiting for a chance, to tell her how I feel and maybe get a second glance, no, I’ll never get used to not living next door to Alice Springs.

I know that the prospect of telling my wife the holiday plans for next year involve Gdansk and Kiev is a little bit daunting. I know Crimea and Odessa have little to offer. I know the food will be crap, the transport difficult and the accommodation dirty. But it’s not really about such trivialities. It’s about being there and for that reason we need Robbie and the boys to knock seven shades of shit out of Estonia tonight in Tallinn, and then finish the job on Tuesday at the Aviva. After all, let face it in the words of Smokie, who the fuck are Estonia?
Posted by Yiddo at 1:32 PM