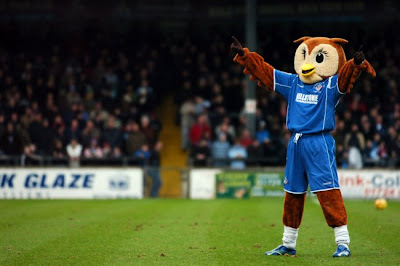 Following on from Theo's heroics at Orient, we went to look for other mascots who contribute a bit more than just a stupid walk and an exaggerated encouragement to the fans to cheer when the team is three down.
Step forward Chaddy from Oldham who is quite happy to take one for the team, particularly if the assailant comes back every week.
From the Manchester Evening News: “I was posing for a fan when out of the corner of my eye I saw this guy coming towards me. I didn’t recognise him and he hit me. He then just walked off to a group of mates and went to the bar.

“There were stewards there but I don’t know if they saw it. The stand was packed though so there were a lot of witnesses. I was alright but the kid I was with was a bit shocked.

“I don’t even want him banned because we need as many fans as we can get. I just want an explanation and an apology.”
Posted by Yiddo at 1:13 PM