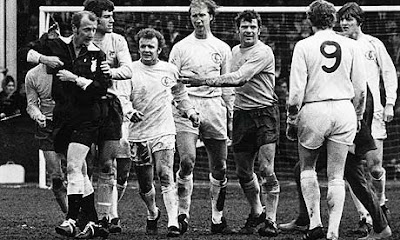 Leeds had thrown away their chance of the 1969-70 title: attacking on three fronts, Don Revie prioritised the European Cup and FA Cup over a trophy they'd already won, sending the kids out against Derby in the league and effectively handing the championship to Everton. But having subsequently come a cropper on all three, they wouldn't be making the same mistake twice, and the following season went hell for leather in the league.

Leeds were favourites going into their last four games. They enjoyed a two-point advantage over their only rivals Arsenal, who had two games in hand but still faced a visit to Elland Road. It was looking promising for them down the home stretch. Then the referee Ray Tinkler made his infamous decision to wave the West Brom striker Tony Brown on, with Colin Suggett miles offside but not interfering with play, allowing Jeff Astle to tap in. "Leeds will go mad, and they've every right to go mad," freestyled the legendary Barry Davies, as Revie skittered around the pitch in a hot funk while waving a travelling blanket, an assorted rabble of Elland Road regulars following his lead.

"Mr Tinkler made a mistake and Leeds have every reason to feel annoyed," chorused Eric Todd of this newspaper, "but there was no excuse for the disgraceful scenes that followed. Broken windows will not mend broken hearts. The referee's decision, like that of the editor, is final." Leeds won their remaining three games, a run including victory over Arsenal, but the Gunners held their nerve and took the title by a point. Leeds fans to this day harbour a grudge against Tinkler, and indeed his decision turned the title race on its head. But it's worth remembering that Leeds wouldn't have been so desperate had they not stuttered slightly over Easter, with draws against Newcastle and Huddersfield; that they were already a goal down in the West Brom game after a calamitous error by Jack Charlton; and that Bertie Mee's Arsenal were the real deal, a 19-year-old Ray Kennedy the star of their run-in.

Taken from the Guardian.
Posted by Yiddo at 1:20 PM