Nice bit of writing by Andi Thomas of the Twisted Blood blog who champions the cause of Leighton Baines as one of the game's all-round cool guys: 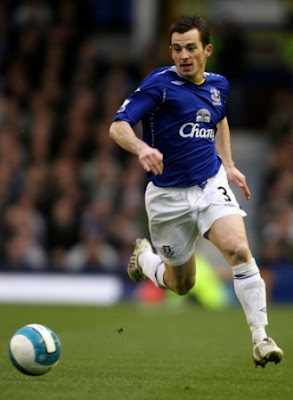 If there were any justice in the world, Ashley Cole would have been inflicted upon a tiny island nation with no hope of making a World Cup any time soon — let’s go for the bank-crashing ash-spewing bastards of Iceland, and consider it revenge for the horrors of Sigur Ros — and the international stage would have been largely free of his malign, grotesque super-competence. The path suitably clear, England’s number 3 shirt would fall around the slightly-stooped shoulders of Leighton Baines, an affable man who sounds like he should be a town in Hertfordshire, looks he could have been the tour manager for No Way Sis, and is one of the more remarkable footballers in the Premier League. I have no idea if Leighton Baines’ shoulders are stooped. But I imagine they are, and so – bang! – they are. Writing is fun.

Yes, he’s good at free-kicks and corners and stuff. And he’s a cracking defender, a fantasy football staple, and a vital part of a decent Everton side. Fine. But what I like about Baines is the simple and apparently unshakeable humanity of the man. He turned down a move to Bayern Munich because he didn’t want to uproot his family. Is that lacking ambition? Or is it recognising that, while football is a transient career of moments, children are the rest of your life? It could, of course, be both; “ambitious man” is often code for “greedy fucktard who is using you”. That doesn’t feel like Leighton.

Earlier in his career, he’d only been able to bring himself to leave Wigan for Everton. He’d rejected moves away from the club that had nurtured him out of a sense of gratitude, and in the end only went because the club that came calling were the club in which he’d invested his terrace affections. Then, when he did leave, he admitted to worrying. Fretting. Lying awake at night, asking himself if he was up to it. That’s what decent human beings do. They act out of gratitude. And affection. And they cry into their pillows at their own inadequacy, and the enormity of a world that hates them. I have no idea if Leighton Baines’ has ever lain awake crying into his pillow. But I imagine it, and – bang! – there he is, sobbing like a tiny child. Writing is fun.

What this all means, of course, is that within the machismo-riddled world of English football he is viewed as weak; a perception that reached its peak last summer, when his omission from England’s South African raiding party led to the guttersnipes winking and throwing around the word “homesickness”, which is code for “not a real man”. But, if the choice is between enjoying the summer with the woman you love and the kids you adore, or being trapped in a hotel complex with 24 pathetic, needy, whining pseudo-celebrities, constantly having John Cunting Terry winkling you into corners and outlining his “concerns” that “the manager” might not be “English” enough, and that “the lads” are thinking of staging a “cup de tit snarf honk” against “Meester Crapello snark snark snigger giggle burp” …

No choice at all. Thanks but no thanks. Fire up the barbecue, pass me the apron, and yes, you know, I think I will have a beer. Leave the telly alone, love. There’s nothing good on.

Basically, I’m trying to say: he’s not a twat. Which is a roundabout way of saying: everyone else is. Writing is fun.