If you go to Chelsea, I'll put this where the sun don't shine ... 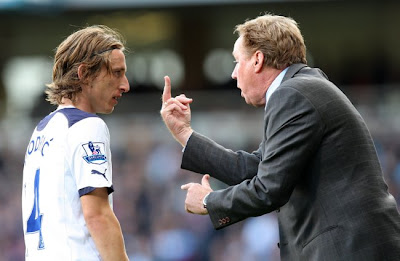 Where are we and where are we going to? Or more relevantly, where are Modric and Bale going to? The skies around White Hart Lane are filled with circling vultures, weighed down only marginally by bagfuls of dinars and rubles. The chances of us holding onto our prize assets – listed above in order of value – appear slight.

And where to then for Spurs, I ask?

Our key players will be snapped up and we will go about our normal business of buying capable but limited-life internationals (think Gallas and Van der Vaart) just before transfer-window close. A reasonable short-term policy but not one that is likely to sustain a long term challenge to the aristocracy. Last year we had a moral victory by taking Manchester City’s place at the table but ultimately in the football game, avarice and greed win out. This year they took their place back, and now the Champions League will be graced with the class and grace of Mario Balotelli. Somehow, football aside, the change that has occurred this year is a depressingly repetitive tragedy.

So is money the only reason why next year we will be travelling to Lodz and Antwerp in the Europa League on a Thursday and playing a large portion of our Premier League games on a Sunday? Sadly probably not.

Harry Redknapp is a man who is to be admired for his forthright talking and his honesty, at least when it comes to matters concerning football. Her Majesty’s tax officers may have a different view.

I am however very disappointed at his inability to get more from what is the largest squad in the Premier League (albeit only 26 can be named for use). This disappointment surfaced largely towards the end of the season and our performance in winning only one league game from 12 February to 15 May can best be described as appalling, and in other instances has resulted in teams being relegated.

Redknapp’s tactical dependence on Peter Crouch is worrying. So too some of his decisions to rest players as crucial league games approached – clearly his priorities were misguided and we were never going to win the Champions League. Surely a long-term strategy of CL participation year-in year-out has to be based on year-in year-out qualification?

But tactics and strategy aside, perhaps the most worrying facet of Harry Redknapp is what achieves him his greatest notoriety. Harry has “in his honest manner” always made no bones about the fact that he would be willing to move to greener pastures should the opportunity arise, and the fact that he moved on swiftly from Portsmouth when Spurs came knocking and he left a club in turmoil and financially irreparable, is a worrying observation. Done at a time when supposedly they achieved more on the field than they had done for years – strong parallels with Tottenham here. How many times have we heard Harry tell us that Spurs were bottom of the Premier League when he took over, and we have nothing to complain about when drawing at home against Blackpool, West Ham and the like.

I’m not saying I’m calling for England to come and take ‘Arry but I am saying that his repeated comments about what has been achieved to date stink of mediocrity; not to mind also being open to an interpretation that he is trying to abdicate on future accountability about taking us higher than the bottom half of the table. His posturing around the Modric Chelsea maneuverings have too much of a tone of “look what they’ve done to me now” about them, with hand held abjectly in the air in despair.

Look Harry, we all like you – to use your own parlance, you’re a diamond geezer – but let’s cut out the David O’Leary imitations and get on with the task of getting us back into the Champions League. If he goes, take to money for Modric and use it wisely; get rid of Crouch and other London-life hangers-on and show us you’re the guy we all thought you were - like Gladys Protheroe, a football genius.

Verdict – jury’s out. This could go eitherway.
Posted by Yiddo at 1:33 PM