A moral dilemma while we travelled rom Manchester 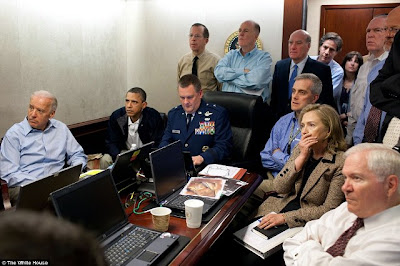 Look it's not my pinko left side coming out here and let's face it I'm on their side in the ultimate Jihad, but do the Yanks have to make a playstation game out of everything?

There they are in the White House, watching Osama get zeroed from a camera strapped to the top of a marine's helmet, all controlled by the army geezer who just can't take his eyes off the controls. Go for it Chuck, you're nearly on Level 16 with the extra ammo that goes wit it.

My kids play console games exactly like that - simulation based where you're helicoptered in behind enemy lines with night vision googles and you've got to take out the enemy before he gets you. I think it's called Black Ops II or something like that. It's not PG - no, it comes with a stronger warning - 18's only - and you definitely lose points if you accidentally shoot the women and children. And now what have the Yanks done, or what has their psyche created - a nation-embracing, age-neutral state of euphoria over the execution of a criminal without due process.

I don't see anything wrong with the need to strike, but I see a lot of evil in the circus that appears to be following the action. There should be no triumphalism in death, even if it does involves the elimination of a barbaric sub-human criminal.

I am reminded of the words of Kamal Ataturk, who remembered compassionately the dead ANZACs who had sought to invade his country at Gallipoli, with the following words:

Heroes who shed their blood and lost their lives! You are now lying in the soil of a friendly country. Therefore rest in peace.

There is no difference between the Johnnies and Mehmets to us where they lie side by side here in this country of ours. You, the mothers, who sent their sons from far away countries wipe away your tears; your sons are now lying in our bosom and are in peace.

After having lost their lives on this land they have become our sons as well.

Death shall have no dominion, and core Christian values must always have their place. Otherwise we become worse that those we seek to overcome.
Posted by Yiddo at 6:30 PM