There's no Rope as long as Time

Eight months later, I stop to contemplate World Cup 2010 in South Africa and whether or not it was an appropriate choice of venue for the world’s largest sporting (and arguably social) event.
Yes, I went there with few qualms – after all it enabled us to combine a “passing of age family holiday” with a beautiful country and my / our primary waste of time – the beautiful game. These benefits conveniently outweighed any moral dilemmas we had over the economic impact the World Cup would have on the country and the inequity of granting of a major global franchise to a country still seeking to rid itself of the hangover of apartheid.

Soccer plays a huge part in the lives of black South Africans. While much has been written (and filmed) about the 1995 Rugby World Cup triumph and Mandela’s role therein, the real triumphs in the ongoing fight against discrimination come through the beautiful game.

On our visit to Cape Town, we visited, as everyone does, the island prison colony of Robben Island. Here, in 1967, the inmates formed the Makana Football Association and matches commenced during the two hours of every Saturday which was allocated to the inmates outside their prison routine. Sunday evening was reputedly for talking about the game, Monday to Wednesday for dealing with breaches of rules, and Thursday and Friday for choosing squads and strategizing. Many of the advanced political strategists believed that if a league could be run effectively in such extreme conditions, then there was no reason why they should fear running a country. 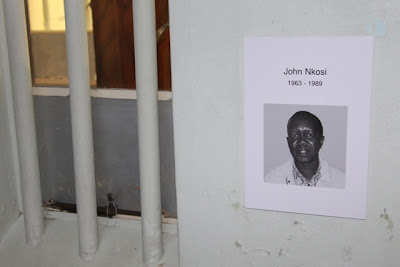 We visited the “Fields of Play” exhibition which charted the development of soccer in the Cape Town and indeed in South Africa. Despite a sporting legacy so bitterly entrenched in the horrors of the apartheid regime, the exhibition was admirably non-political - albeit a portion of the exhibition did focus on the relocation of clubs during the District 6 racial segregation removals in the sixties.

“The Afrikaner officials of the apartheid regime never embraced soccer, preferring rugby and cricket. Funding for soccer was initially withdrawn and subsequently some matches were banned. Apartheid's opponents quickly seized on the potential of using soccer to rally support and raise funds. The African National Congress (ANC), then a banned underground movement, quickly realized that wherever there was soccer, there was a crowd.

Political meetings suffered a blanket ban from 1976 onward, but it was far harder to prevent several members of a political party from sitting together in the stands, amid thousands. By the 1980s, activists commonly organized themselves into soccer squads (the most infamous was sadly the Nelson Mandela Football Club) to confound the regime. They could travel easily across international borders, and matches represented a valuable source of money for underground anti-apartheid organizations.

By the late 1980s, soccer matches were at center stage of the country's rapidly evolving politics. ANC flags, which were still banned, were seen openly in soccer stadiums, a sign of the regime's weakening grip on power. In 1991, two years before the collapse of apartheid, South Africa's current soccer federation was founded. During its inaugural meeting, it stated that its’ formation was "only natural ... as the sport of soccer had long led the way into breaking the tight grip of racial oppression."

The Fields of Play exhibition also turned up our old Leeds friend, Albert Johanneson the first colored player to appear in an English FA Cup final. 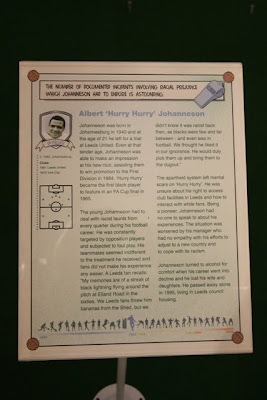 Apartheid fell in 1993 and seventeen years later the country hosted the World Cup finals. The football was circumstantially poor but the event was a sparkling success. The event was well organized, the hosts friendly and the facilities top class. The perception of South Africa as a modern nation improved globally.

But perhaps the most important observation that one could make was that a host team, with only one white player in eleven, received the support of a whole nation – the Bafana Bafana shirts were worn by children and adults who were both black and white, or differently put – were neither black nor white, but who were South African. In a manner that appeared to mimic Mandela almost single-handedly embracing the Rugby World Cup win, the population at large seemed to adopt the Zulu boys and will them (sadly unsuccessfully) to further glory. For a short while, the past seemed like the past.

Perhaps this spirit of togetherness will prevail when the true financial cost of hosting the World Cup is worked out and assessed. And when the incredible harmonising powers of Nelson Mandela are no longer there, and younger and more militant influences within the ANC are more prevalent. If the togetherness prevails, and let's pray that it does, then the decision to place the competition in South Africa will have been an immeasurable success.
Posted by Yiddo at 8:24 PM