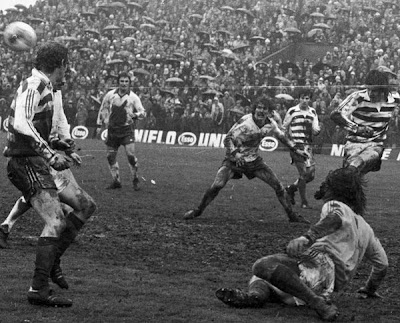 Thinking ahead to the imminent LOI season commences with looking back at a key event from last season.

Congratulations go to Sligo Rovers in winning the FAI Cup in the final game of last season and in doing stopping the Hoops from completing the League and Cup double.

The final was a re-run of the 1978 final when Ray Treacy (ex-footballer; ex-ticket tout), scored the winner for Shamrock Rovers from the penalty spot in first-half injury time. Played in torrential rain, the 1978 game was a dull affair with the principal talking point being at what stage Art McCooey became aware that the green dye from his paper Rovers hat was running down his face into his eyes. Opinions varied on this, but all agreed it was after the time that the hat-seller has scarpered with Art’s £1 coin in his arse pocket.

Looking back on it, it is hard to see how we persuaded Art up to Dalymount Park that Sunday afternoon but it was certainly worth it for the aggrieved look in his green-stained face.

The Irish Times featured the game recently in its’ archive section and it is nostalgic to remember some of the names of the day:

CONTROVERSY, raw, and at times ribald, hung like a pall over Dalymount Park yesterday after Shamrock Rovers, in the manner of so many of their earlier successes in the competition, had cheated their critics and celebrated their coming of age with their 21st success in the FAI Cup.
Sligo Rovers, at the end of a season which promised so much, were left with nothing more than memories and the singular eeriness of the losers’ dressingroom when a penalty, converted with aplomb by Ray Treacy in the 48th minute of the first half, separated the teams in a taut, tense game.

History teaches that all of the more memorable cup finals contained the essential element of controversy. And in this aspect, at least, yesterday’s game seemed destined to stand the test of time.

John Carpenter’s preparedness to make unpopular refereeing decisions has, perhaps, involved him in more debate than any of his contemporaries. His award of the critical penalty merely served to embellish that reputation.

The players were already anticipating the respite of the interval when Tony Fagan, in a moment of rare carelessness, gave the ball away to Johnny Giles. And Giles, perceptive as ever in such situations, immediately pushed the quick, through pass to Steve Lynex just inside the penalty area.

There will be a dozen different versions of the incidents that followed, but, as I saw it, Lynex was pushed as Paul Fielding and Chris Rutherford converged to make the tackle. The referee first ran in the direction of the scene of the foul and then, in a change of stride that will haunt Sligo men for years, he veered towards the penalty spot with a total certainty which brooked no argument.

In the context that Lynex was pushed, I believe he ruled correctly. More contentious, by far, was his decision to play four minutes injury-time in a half in which the stoppages were minimal.

In those eventful seconds, the game was won and lost for, while Sligo enjoyed the odd, fleeting moment of affluence in the second half, Shamrock Rovers held their line intact in varying degrees of efficiency and expediency.

Thus, the trophy, suitably decorated in green and white, went back to a familiar resting place last night and Shamrock Rovers, in a fashion, had fulfilled their destiny.

Those who had thought in terms of a huge crowd to provide the requisite atmosphere on the terraces, reckoned without the whims of nature. This was an afternoon taken from deepest winter – with wind and sleet sweeping the grounds for hours before the kick-off. It cut the attendance to less than 15,000 and yet, for much of the first half the level of entertainment was quite superb …………………

Shamrock’s concession to enterprise was predictably smaller as they staked everything on retaining their advantage in the second half, but they might have had a second goal in the 74th minute when Mark Meagan’s shot was rather fortuitously blocked by Fielding’s boot.

................ Giles himself had contributed nobly to success and some of his distribution on a day when ball control was hazardous in the extreme was as good as anything he has produced in recent years.

Dunphy’s first-half performance outweighed his eclipse subsequently and Meagan, in his own unspectacular way, contributed to the success of the middle line.

Fullam’s achievement in winning his eighth cup-winners’ medal was distinguished by characteristic skill and vision and it was his influence which dominated a defence in which Pierce O’Leary, Mick Gannon and Synnott all showed to excellent effect.

Treacy. coated in mud, was unsparing as ever in his efforts to bludgeon a path down the middle, but, like Lynex and Larry Murray, he was invariably blotted out by sheer weight of numbers.

Penalties featured strongly in this years event when, after a nil all draw, the game went to extra time and then penalties with Ciaran Kelly saving all four of Shamrocks Rovers' spot-kicks to win the cup for Sligo. A positive note from the game, in addition to the Hoops losing, was the attendance of 30,00 at the Aviva. 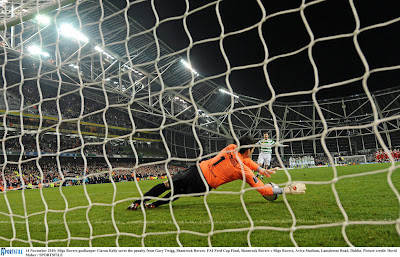