The Day the Music died 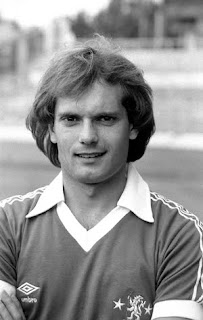 So sad to see the departure of Ray Wilkins from Chelsea this afternoon. Let's face it for our generation, this man was Chelsea. A shining light in a team festooned with mediocrity. Chelsea in the mid-seventies.

And what happens today? The unrelenting march of the oligarch continues and years and years of history, devotion and dedication goes out the window. South London is in tears - or maybe not.
Does the current generation of fans down the Kings Road even know what the Shed meant and how much Butch contributed to its' aspirations and dreams? I think not. Yes his picture is on the wall in the Harding suite - beside Leboeuf; Gallas; Zola; Vialli and the Czech guy ("what was his name again)? My father used to watch Wilkins play they say, in between sips.

Ray remember this - to some of us you were vital, as important as Status Quo and tartan scarves tied to the wrist, Rod Stewart's "I am Sailing" and Britt Ekland. Your memory will linger at the Bridge always, and if only you had got rid of that nasty little habit that developed at training in recent years, there's nothing to say you wouldn't have been with us forever.