The sad events at the Love Festival in Duisburg over the weekend call to mind the similar tragedy which occurred at Hillsborough in April 1989, six minutes into the Cup Semi-Final between Notts Forest and Liverpool.

One must hope that those public servants in Germany who through their actions or inactions contributed to the disaster have the honesty, fortitude and dignity to admit their part in the debacle and to answer for their actions. Sadly at Hillsborough this has never been the case.

Ninety six football supporters died at Hillsborough or in its' aftermath and the photographs of the crushed men, women and children, though easily accessible on the net, are too horrific to be placed on this page. All of us who experienced football grounds in the days before all-seater stadiums all too vividly remember the fear and apprehension as you became caught up in a crowd surge, or were swept along, feet off the ground, in a seething mass of humanity. To those that died that April day in 1989, it can only be described as a horrifically frightening way to die.

To those relatives that they left behind, the nightmare memories that came from the day have been compounded by their callous treatment at the hands of the UK Judicial system since then.

Whether someone should answer criminal charges for their incompetence in their workplace (The South Yorkshire Police) is a moot point, but the fact that those in charge have failed to acknowledge their role in the disaster and have lied about key aspects of their operational and strategic policing decisions on the day fall short of what one expects in a civilised state. However I think we all know about the record of the English police in believing that they are above the law - if in doubt ask the Birmingham Six or the Guildford Four.

The Hillsborough Family Support group continue to seek answers to some key questions and to get acknowledgement of responsibility from certain key individuals on duty on the day. With regard to organisational competence:

Of arguably far greater concern was the decision of Chief Superintendent David Duckenfield to advise the media on the day of the tragedy that the gates had been stormed by the fans rather than opened, unsupervised, under his directions. A shameful lie, part of the conspiracy to blame supposedly drunken Liverpool fans for the tragedy. Further evidence of this assumption of guilt on their part came in the formal investigation, prior to release of the dead bodies to relatives, of the drinking habits of all the deceased fans prior to the game - regardless of their age.

In trying to write about this event as a genuine football fan, it is hard to know when to stop in cataloging the grievances. The appalling mismanagement of the process of identification of the dead bodies and the return of their remains to family members, and the shameful investigation by the West Yorkshire Police into their neighbouring constabulary in subsequent years are further aspects which also deserve scrutiny.

Justice has not been served and there must be significant doubts that under the supposedly greatest legal system in the world, it ever will be. As often is the case, it will be left to the ordinary man and woman to remember and pay tribute to those that died on the fateful day. The memorial at Anfield is testimony to the memory and it is fitting that among the shirts festooning the memorial gates, hangs the shirt of Liverpool's arch-rivals, Everton, with the handwritten tribute: 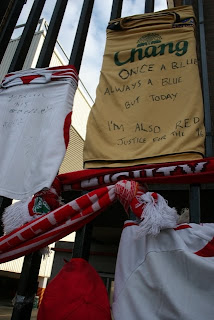 Long may they live in peace.
Posted by Yiddo at 9:13 PM