Read an article last night featuring the Division 1 season in 1969/70. Becoming a bit obsessed with the sixties I am.

The 1969/70 table was intriguing in that it was the last time that Leeds (1st), Everton (3rd), Chelsea (5th) and Spurs (6th) ended up in the top six places. Since then only Everton have stayed in the top league interrupted.

Leeds won the title with what was described as a “cult of collective anonymity”. Flashes of brilliance were often ignored by the media, who have preferred to focus retrospectively on their approach of playing only one up front (Mick Jones) for much of the season, and also the gradual emergence of their “dirty” tag under Revie. Irrespective of the tactics, their achievement of losing only two games during the season remains highly impressive.

Everton’s Holy Trinity was beginning to develop and the following season they would prove to be league winners as Leeds were pushed into second position.

The Cup was won by Manchester City, beating Leicester 1-0 in the final. Everton and Spurs were beaten by Man City, Chelsea lost to West Brom and Leeds lost in the third round to Sheffield Tuesday.

The League Cup was won by Swindon beating Arsenal 3-1 in the final. Everton and Chelsea lost to Derby, Spurs lost in the semi-final to the Arse and Leeds went down to Crystal Palace.

Leading goalscorer award that year went to Jimmy Greaves ending his last complete season with Spurs. The following season would see him transferred to West Ham in a swap for Martin Peters, and then post-season embark on the London to Mexico World Cup Rally which he completed successfully. 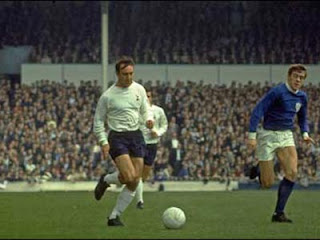 Of the teams in Division 1 that year, 12 (or 22) are no longer in top flight football. Amazingly, and as an aside, looking at the tables for the first year of the Premiership in 1993, 13 of the teams that participated are now in lower divisions.
Posted by Yiddo at 2:09 PM