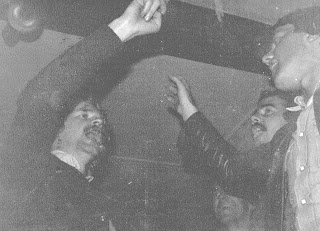 Easter Sunday is a notorious time for silent collections in the pubs around the border counties and a lot more come out wearing Easter lilies than went in.

Released under Freedom of Information laws thirty years after it was taken, the above photograph shows locals responding to the playing of "A Nation Once Again" in Dorrians pub in Ross na Kill, Co Donegal.

In those dark and distant days, misguided allegiance to the cause was commonplace and it was also relatively easy for a few dominant personalities to force less assured members of society to contribute large sums of money to the struggle. The picture above illustrates this - the cell leader is on the left and note the definite pointing of the fingers in aggressive support of the underlying lyrics in the rebel song. The two new members (the targets) appear uncertain, looking for guidance from the leader and the one in the leather jacket almost appears to be waving - quite pathetic. Can't see him lasting long in the organisation and I bet they took him down the beach and battered the shit out of him the following afternoon.