The sad case of Albert Johanneson 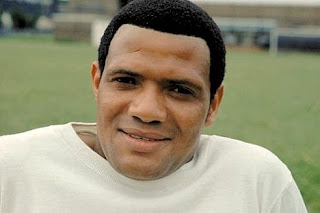 The current crop of Leeds players are beginning to annoy me. Let’s face it – Leeds are a Premiership club with a shitload of pedigree and listen – they even won it once, which is something the yids or the toffees cannot boast.

And where are they? – languishing in Division 1 (the old Division 3) playing the likes of Walsall and Gillingham. This season they put an early-season run together which got them way out in front and a virtual cert for the title. However, an away cup victory at Old Trafford and delusions of supremacy set in and the egos start getting inflated. The day after the victory Beckford insists on going on the transfer list and the rest of them start thinking they’re world beaters. The sequence of league results post Man Utd is alarming – 1-1, 0-2, 0-3, 2-0, 1-3, 2-2, 1-1, 1-2, 1-1, 2-0, 2-2, 1-1, and 4-1. In other words 15 points from a possible 39.

These over-paid clowns would do well to look back for inspiration at their clubs’ history and some of the players who wore the shirt with pride. Take Albert Johanneson for instance. Albert hailed from South Africa, where he played with Germiston Coloured School and Germiston Colliers and following a three month trial in 1961, soon made his debut in the Leeds first team. His bewitching skills at outside-left caused havoc in Second Division defences and he finished joint top scorer as Leeds won the Second Division Championship in 1964. On promotion, he continued to mesmerise his defensive opponents in the First Division but was a constant target for racial abuse, representing a class and culture which was rare in the football league in the sixties. Sadly, his confidence was reportedly undermined by the jibes of his opponents.

After exactly 200 appearances, Johanneson joined York City in 1970, where he only played a handful of games before retiring. Upon leaving the game, without the comforts modern players enjoy, his life went downhill rapidly. His marriage broke up, alcoholism set in and he lived his final days in squalor with his brother Trevor in a tower block in Leeds. At the age of 53 he was found dead. Mourners at his funeral included many of the great Leeds team he saw and assisted in its formative stages.

So, Beckford and Bechhio, before you secure your million pound transfers to the Premiership – remember there are men who have gone before you who have given more to football and to Leeds United than you ever will and you need to start playing and delivering results to justify your trip to back to your crib every Saturday evening in your Maserati.