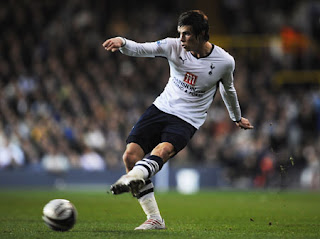 Occasionally you get one of these players who have you on your feet in anticipation as soon as they get the ball. Well Spurs have one at present in the shape of Gareth Bale. His start with us after signing from Southampton was hardly inspiring - injured for a significant portion of his first two years (perfect Spurs material) he then developed the unenviable record of failing to end up on the winning side in his first 24 games for the club. This sequence was broken when he played the final five minutes in the 5-0 defeat of Burnley in September 2009.

This has all changed now and with Bale holding down a first team spot, Harry’s tactics include a simple instruction to the other ten – give the ball to Bale. As soon as he gets the ball at his feet, the crowd rise expectantly and nine times out of ten, he beats the opposing right-sided players and either crosses fro the bye-line of gets in a shot on goal. It is quite simply electric.

I tried to think of others who had this impact and can really only come up with Ginola and Waddle, and before my era they talk of Cliff Jones in similar vein. Others would include Gigs, for Leeds Eddie Gray and for Chelsea Charlie Cooke. Sadly Everton never had anyone with this amount of flair.
Posted by Yiddo at 7:54 PM