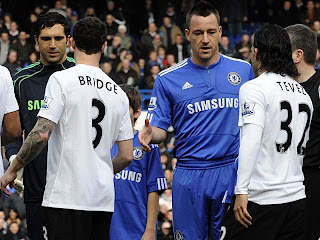 Without dwelling on the unfortunate fact that it helped both Man City and Man Utd in their respective pursuits of 4th and 1st place, it was nice to see Wayne Bridge getting one over on John Terry this afternoon. It was however scant revenge for Terry getting one over (leg that is) on Bridge's wife a few weeks ago.

Terry, albeit a great player, is a prime example of the type of lowly principled, ignorant moron who festoons the English game at present - a man with no moral turpitude who can probably show loyalty to only one thing - money. In a game where team spirit and camaraderie is supposed to count for so much, bonking the wife of a team-mate is hardly the behaviour of a leader and captain.

Tevez has been quick to support Wayne Bridge, wearing the "Team Bridge" t-shirts and then embracing Bridge after the goal today, but then Tevez and Terry have a bit of previous....

Good gob as they say but then you know you're in the ring with knackers when it gets to this.
Posted by Yiddo at 11:14 PM