Listening to Half Man Half Biscuit's tales of the headless centre-forward in Subbuteo led me to ponder again the nuances of this brilliant, albeit substantially useless, pursuit.

It was the summer of 1971 I think (why did nothing happen in winter back then) and we eventually weaned Hartnett off Totopoly and into the replica world of professional football. A mini-league was started and my Subbuteo Match Record details a relatively easy 2-0 win away to Everton, at their previously impregnable fortress of Brewery Road. A 4-2 win against Michael McCarthy was followed by a surprising home draw against my Dad. I assume this one was a friendly and that I let him back into the game with a sloppy bit of contrived defending in the dying minutes. A mixture of paternal love and the pragmatism needed to get to Glenmalure Park the following Sunday.

Sadly the pristine fixture book recorded no more games and I therefore must have retired undefeated. With me off the scene, chances opened up for other players and it's evident from the picture below that Martin Buchan got the hang of it fairly quickly. Note the position of the right index finger. 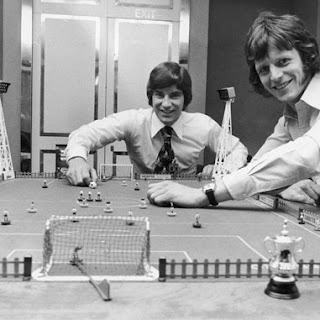 Anyway to close this tribute to the miniature game, we turn to the underrated Derry boys, the Undertones and their song about childhood jealousy and hatred, understandable when you realise that "he flicked to kick and I didn't know".