Reading on the toilet

A singular and solitary pleasure.

Yesterday's reading was the Spurs Everton program from October 27 (2-0) with Tommy Huddlestone on the cover. Inside a feature on Walter Tull an ex Tottenham player who it transpires was the first black outfield player in England. Looking at the photographs I couldn't help notice the resemblance between the two players. 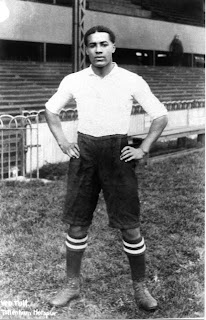 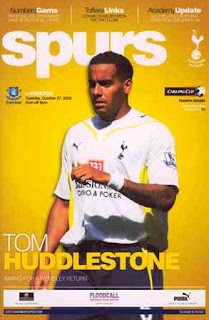 Walter was the son of a Baijian father and an English mother but ended up in a London orphanage at the age of 10. His footballing skills resulted in him signing for Spurs in 1909 and he went on to play 18 games for the club, scoring 7 goals. He left Spurs to join Northampton Town and played 110 games for them before World War I called him into active service. His regiment, the 17th (1st Football) Battalion of the Middlesex Regiment was sent to France in November 1915 where they took part in the Battle of the Somme.

Following being invalided out of France, he undertook officer training and returned as a second Lieutenant in the 23rd (2nd Football) Battalion to fight again at the Somme, in the second Battle of the Somme. On March 25, 1918, in no-mans land at Pas de Calais, he was reported to have been shot in the head and he died instantly. His body was never recovered - the memorial at Arras and the cemetery wall at Fauborg Amiens bear his name. He served for close to the entire duration of the war, was mentioned in dispatches for gallantry and was posthumously awarded the British War and Victory medal.

Tommy for his part is 22, likes Beyonce and playing Xbox, earns in excess of thirty five or forty grand a week and is often accusing of being a little bit too lazy on the pitch for his own good.

While it is clearly gratifying to see how far "minorities" have come in the English game over the last hundred years, it's sad to see how far the game itself has moved away from the core values which are, and always have been, its' lifeblood.

It's all gone wrong somewhere, me thinks.
Posted by Yiddo at 8:36 PM