The real story about the Mini

"God, love there I was telling the audience about the nil all draw with Barnsley and these four Irish geezers stood up and they were wearing t-shirts with me on it - matching t-shirts - frightened the fuckin shit out of me. There was one small little fellah, one ugly brute with a t-shirt that was miles too small for him, one with a lisp and the last one had barely a pick on him - like something from Belsen.

Anyhow the boys kept following me around asking me to dance, so I ran like fuck down into the car park and was running so fast I nearly fell over the Cooperman's Mini Minor. I vaulted it in one leap and didn't stop running till I got three blocks away from the four poofs with their piano...." 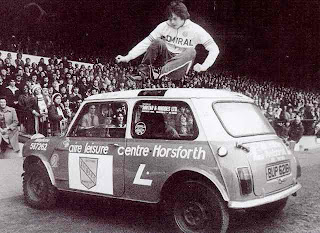