Times were tough in the late seventies for the Blues with several barren years, compounded by the rise of the hateful Rovers, inspired by the legion of returning emigrees - Gilesy, Treacy, Dunphy - and the foreigners from West Brom - Lynex, John Osborne and the like. We had precious little to sheer about until a young lad from Everton arrived and set the place alight. Single-handedly he challenged the authority from Glenmalure.
The pinnacle may have come later (with the Cup Final win against Pat's in 1980) but the day that we'll always remember him for was the cup semi-final at Dalymount Park in 1979 against the Hoops - three minutes left and Syd strikes home a penalty, then climbs on the fence in front of the Shed as the surge of hatred from the Hoops fans commenced. What did it matter that he looked like a total poof - we all did in those days.
That evening we drank in the Merrion Inn, with the sound of "Hit Syd" still loud in our ears. 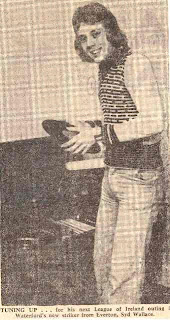