Paris in the Springtime 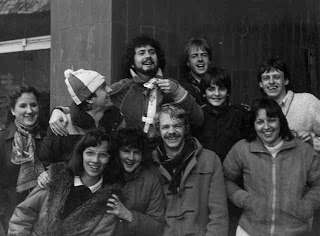 March 1982 - Ireland had won the Triple Crown and were seeking the Grand Slam in Paris. A motley crew of misfits and liggers, headed by the Dutch diaspora, headed to France for the final encounter. Gazing at this photograph, it's easy to gauge the kind of inspiration Slattery and Duggan got that eventful day as they gazed into the crowd and said "Come on boys, let's do it for the fans".

The history books will record forever a comprehensive French victory.
Posted by Yiddo at 3:40 PM