Mark Ryan may have been to embarrassed to mention it at his recent 50th birthday bash, but McCooey's front lawn was for some of us the pinnacle of our sporting career. And what's wrong with that I hear you say - dodging ahead of Clifford Nolan and grabbling the frisbee from under Rich Hudson's nose was no mean feat after all.

The rivalry between certain people was intense although Gerry used to take the piss out of Brian by snigggering at his inept jostling and posturing prior to throw in. As they say, he had him in his pocket all the way along. 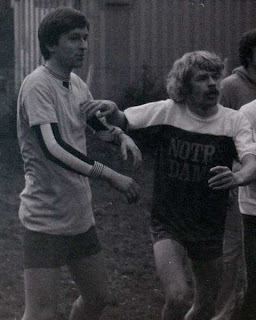